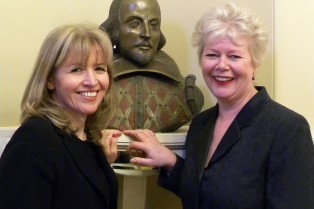 Stratford-on-Avon District Council together with Stratford-upon-Avon Town Council have appointed a new Project Manager to develop Shakespeare’s Birthday Celebrations as an internationally recognised event in Stratford-upon-Avon, the wider District and across the world.

Today, Wednesday 8 January, Val Harris has been appointed to this role.  Val will be looking to secure funding and sponsorship for the Birthday Celebrations to take the pressure off the public purse and develop the event for the future, continuing to work with partners.

Cllr Maurice Howse, Enterprise, Housing and Revenues Portfolio says: “The forthcoming Shakespeare celebrations are of worldwide significance and will put Stratford-upon-Avon firmly in the spotlight and as such need special attention.  This is a new approach with the opportunity to expand the Shakespeare’s Birthday Celebration programme without burdening the local taxpayer, through generating sponsorship and other funding streams.”

Cllr Diane Walden, Mayor of Stratford-upon-Avon Town Council says: “This is a new era moving forward for the Birthday Celebrations, looking to build on past success.”

One of the main duties of the role will be to create a ‘Friends of the Shakespeare Birthday Celebrations’ scheme – to provide financial support and also volunteers with people getting involved to secure future Celebrations.