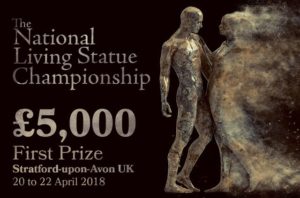 Stratford-upon-Avon will play host to the UK’s first National Living Statue Championship on 20-22 April as Shakespeare’s Celebrations and LSD Promotions have teamed up for this exciting element of the new look 2018 Birthday Celebrations.

A brand-new highlight of the extended three-day extravaganza, the Championship provides a fantastic opportunity for professional and junior Living Statues to pitch against the competition to win a cash prize. Applications to take part in the competition have now closed as artists have flocked from across the world to join the inaugural competition.

Cllr George Atkinson, Chairman of Stratford-on-Avon District Council said ‘Living Statues are immensely popular and draw crowds into towns and cities all over the world. Having the first UK National Living Statue Championship is a real coup for Stratford-upon-Avon and we are very pleased to have this form of art entertainment added to our offer.’

Dermot McGillicuddy, Director of LSD Promotions said: ‘The response to the event has been fantastic. We have artists attending from Spain, Greece, Holland, Poland, Ukraine, Cleveland, Ireland and from across the UK. We also have both the current child world champion and the current Dutch child champion so it certainly promises to be a great event.  We can’t wait to showcase the wide range of top talent on offer. ’

Cllr Victoria Alcock, Mayor of Stratford-upon-Avon said: ‘Every year Stratford-upon-Avon buzzes with excitement as the Shakespeare Birthday Celebrations take place and this year having the new Championship ensures there is non-stop entertainment available. Our biggest annual event is set to become even bigger!’.

The winner will be announced from the bandstand on the recreation ground at 4.15pm on Sunday 22nd April. There will be a panel of judges who will visit each artist across Saturday and Sunday and mark them between 1-5 on various aspects including their character, costume and make-up.