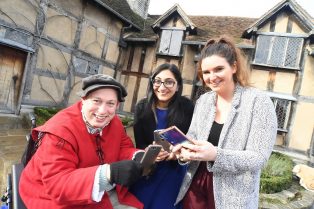 Modern day bards are being challenged to reproduce the finest works of Shakespeare in just 280 characters as part of his birthday celebrations.

Shakespeare’s 37 plays averaged around 22,500 words per play, but now organisers of his birthday celebrations are appealing for more modern versions of his works.

Tens of thousands of people will flock to Shakespeare’s home town of Stratford-upon-Avon on Saturday, April 27 and Sunday, April 28 and as part of the commemoration, organisers are looking for the best examples of his plays in a single tweet.

The #280ornot280 initiative aims to see all his plays reproduced with a modern twist – and the best will be showcased during the birthday weekend for the two categories, 13-17 and 18+.

The two winning entries will be featured on the Shakespeare’s Birthday Celebrations website and the 18+ category winners will receive an Afternoon Tea voucher for 2 adults and 2 children at Hathaway Tea Rooms in Stratford, and the 13-17 age group winner will receive an Explorer pass for a family of 4 which includes entry into the top Shakespeare’s England attractions in Warwickshire.

Helen Peters, Chief Executive of Shakespeare’s England who help to organise and promote the celebrations, said: “The works of Shakespeare have been studied and enjoyed for centuries and his birthday celebrations are an opportunity to look at new ways to honour his work.

“Twitter is one of the world’s most popular communication tools with millions of users across the globe so we believe that this would be a perfect way to celebrate his birthday this year.

“We are looking for creative ways to condense plays into 280 characters that best summarise each of his plays – and consideration will also be made for those who put a modern linguistic twist on his works.

“The whole idea of #280ornot280 is for it to be fun and interactive and to get people talking about Shakespeare before, during and after this year’s birthday celebrations.

“We look forward to seeing the entries and we hope that the competition will draw people from far and wide to get involved and help to celebrate Shakespeare’s Birthday!”

“We’re delighted, therefore, as we prepare to celebrate his birthday in 2019, to be helping to bring Shakespeare firmly into the age of social media, and to encourage new audiences to engage with and negotiate his language and stories in exciting and relevant territory.”

Geraldine Collinge, Director of Events and Exhibitions at the Royal Shakespeare Company, who will be putting on a host of free activities around the Birthday Celebrations, said: “The annual Shakespeare Birthday Celebrations are a wonderful opportunity for people from Stratford and across the world to explore our town’s heritage and the life of the world’s most celebrated playwright.

“Shakespeare’s plays have been reproduced and adapted in many ways over the centuries since they were first written. Taking to social media to tell his stories in 280 characters or less is a fantastic way of showing how his themes and characters still resonate.”

To submit an entry, people can either email bardbirthday@gmail.com or send it via twitter, but need to make sure to include the @Shakespearescel, by April 5, 2019.