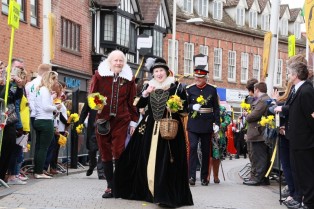 The huge influence of William Shakespeare around the world is clear to see when you talk to some of the proud Stratfordians joining this year’s 400th Anniversary celebrations from across the globe. They will be in town for the ‘Stratfords of the World UK Reunion 2016’ and the highlight of their busy programme will be representing their countries at the Flag Unfurling Ceremony, as Shakespeare’s 452nd Birthday Parade reaches its climax on 23rd April 2016.

“The Unfurling of the Flags of Nations is at the heart of our traditional ceremonial on Shakespeare’s Birthday. We are pleased and honoured that fellow Stratfordians will be playing such an essential part in our celebrations.  We hope they enjoy the marvellous carnival and commemoration we have planned marking 400 years of Shakespeare’s great legacy to the world.”

Meeting in Stratford-upon-Avon in this very special 400th Anniversary year is both exciting and highly appropriate, says Tim Raistrick, Chairman of Stratfords of the World UK:

“Each of our sister Stratfords expressly chose the name for their town and adopted the culture of Shakespeare to a greater or lesser extent.  They are all extremely proud of their connection with Shakespeare, as reflected not least in the renowned theatrical productions and performances of his work that take place every year in Stratfords around the world.”

“Coming to Stratford-upon-Avon and taking part in the Birthday Parade in this way is an honour in itself, but when you consider they will be missing their own celebrations back home in this very significant year, it is clear how much it means to them to join us.”

Every other year, six Stratfords from around the globe gather for a reunion and celebration of both their shared culture and unique qualities.  Stratfordians from Connecticut USA and Ontario Canada set up a ‘sister cities’ programme of cultural and social events in 1985, shortly afterwards joined by their inspirational namesake from Warwickshire, then towns from Prince Edward Island, Canada, Australia and New Zealand expanded the group in the late 1990s.

This year, from 20 – 26 April, Stratford-upon Avon will host around 140 guests for the special 400th Anniversary festivities including the Shakespeare Birthday Parade, in a week long programme of events, trips and warm Warwickshire hospitality.

Such has been the enthusiasm for the 2016 event that two receptions will be necessary to welcome everyone.  Breakfast or Afternoon Tea at the Town Hall will kick off the proceedings on Thursday 21 April.

“We are looking forward to a fabulous week involving plenty of opportunity to catch up with old friends and make new ones. The programme includes family entertainment, a banquet, optional excursions further afield, a chance to visit Stratford-upon-Avon’s newest attractions, see a theatre performance and spend some time as regular tourists in our wonderful town.  We look forward to welcoming them, showing them what Stratford-upon-Avon and indeed the UK has to offer during their stay.  We hope they’ll be inspired to come back soon.”

For delegates arriving and local host families providing accommodation or transport, the experience is an enjoyable one which has already resulted in lifelong friendships reaching far beyond the main Stratfords of the World reunions every two years.

“The significance of the Stratfords of the World program is the creation of friendships that last over time and distance, appreciation for the way of life in other countries, the joy of sharing our lives and opening our hearts and homes to other ‘Stratfordians’.

“Our common bond through Shakespeare and music brought us together initially; the program’s legacy is enduring friendships. Since first joining in 1993, I have hosted and/or been hosted by Stratfordians from Canada, New Zealand, Australia, and England. Ours is truly a global neighborhood. Not all hosting is done during large reunions; sometimes folks are just passing through our town and need lodging for a night or two. Lovely and so very Stratford!”

“Shakespeare has had a profound economic and cultural effect on Stratford, Ontario for more than 60 years through the creation of the Stratford Shakespeare Festival.

“In 1952 our two major industries – steam train engine repairs, which employed 40% of our work-force, and furniture manufacturing were both disappearing. A young, local journalist, Tom Patterson, proposed the creation of a summer Shakespeare Festival and, with the encouragement of $125 from city council, headed to New York for advice. That led to a phone call to Irish director, Tyrone Guthrie, and Patterson’s admission that we knew nothing about theatre, was a siren call that drew Guthrie here. He would have carte blanche. Guthrie brought with him designer, Tanya Moiseiwitsch, and together they created the first thrust stage in the world after 1616.

“The 1953 season productions were ‘Richard III’, staring Alec Guinness and ‘All’s Well That Ends Well’, featuring Irene Worth; the first four seasons were performed under a tent until the permanent Festival Theatre was built on the same site in 1957.

“This season, there are four permanent theatres staging thirteen productions with the opening preview performance on April 19 and the final performance on October 29; it is now a $60 million industry.

“The Festival is the foundation of our flourishing tourism industry that draws people from all over North America and supports a host of summer cultural festivals, fine-dining restaurants and boutique retail shops.”

Tim Raistrick and his UK organising committee are keen to hear from anyone interested in being involved with activities, providing host accommodation to incoming delegates or helping with transport during this year’s Reunion in Stratford-upon-Avon.  There is lots more information at www.stratfordsoftheworlduk.com or email stratfordsoftheworlduk@gmail.com