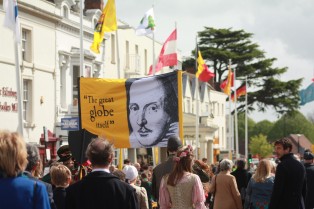 Celebrities from the world of literature and theatre are united in their support for the annual festivities about to get under way in Shakespeare’s home town.

Shakespeare’s 451st Birthday Celebrations reach their climax on Saturday 25th April with the iconic annual parade through the streets of Stratford-upon-Avon.  It’s the highlight of a feast of entertainment throughout the festival weekend which has something to please everyone.  The commemorative events have taken place since 1824 but the aim remains the same: to remember the fascinating legacy of William Shakespeare, playwright and poet, and to celebrate it here for generations to come.

High profile personalities who have pledged their support by becoming Patrons of the Friends of Shakespeare’s Celebrations are enthusiastic in their praise.  Dame Janet Suzman said:

“It seems to me as obvious as the heat of the sun that celebrating the birth of the world’s greatest poet must continue till doomsday. It’s one of the only really lovely national events in any given year that absolutely no-one can bicker about.”

All the traditional ceremonies and customs will be happening over a packed 4 day period beginning on Shakespeare’s actual birthday, 23rd April.  There are events, activities and entertainment, the vast majority free of charge, for all the family to enjoy.

David Bradley, actor and another Patron of the Friends of Shakespeare’s Celebrations has fond memories of the procession. He said: “I remember well the excitement of taking part in the Birthday Parade for the first time with my children at my side and on my shoulders, carrying their little sprigs of Rosemary, and the streets lined with so many people, locals and visitors alike, all the way to Holy Trinity Church.”

The spectacular Parade will kick off at 10.30am on Saturday 25th April this year, with West Midlands Fire Service Band leading guests from the Town Hall to Bridge Street ready for the ceremonies. ‘Shakespeare’ will leave his birthplace in Henley Street with Coventry Corps of Drums and his Horse Drawn Birthday Cake, which will be led by horses Vesper and Beatrice. They will then begin the symbolic ‘cradle to grave’ journey.

The lively and colourful procession will take a newly extended route via Shakespeare’s Birthplace to Holy Trinity Church to symbolise the Bard’s life journey in the town, from the cradle to the grave and give more people a chance to watch the spectacle as it takes in Wood Street, Windsor Street and Henley Street.

There will be a variety of events and activities throughout the town all day and at 4pm visitors will be treated to The Great Morris Flashmob which will be taking place at Bancroft Gardens. The day will come to a close at 7.30pm with a ‘Singing Shakespeare’ concert in the Guild Chapel with Khymerikal – a contemporary chamber ensemble specialising in the performance of twentieth and twenty-first century.

Throughout the day, there will be plenty going on to entertain everyone, including a Shakespeare Show Window Trail Competition offering some competitive family fun. Look out for shops with black and gold balloons outside and window displays with a Shakespeare theme!

There is a new approach to funding the event through Shakespeare’s Celebrations: a local initiative jointly led by Stratford-upon-Avon Town Council and Stratford-on-Avon District Council to generate financial and practical support for the traditional celebrations and safeguard their future for the town.

After an impressive debut last year, Shakespeare’s Big Birthday Cake makes a welcome return to the parade, freshly decorated with a ‘Battle of Agincourt’ theme by community arts groups and local schoolchildren.  It will once again take pride of place on its horse drawn carriage.

Beyond the 2015 festivities, local organisations including key players: Shakespeare Birthplace Trust, the Royal Shakespeare Company and Stratforward Business Improvement District Company, will be working with Shakespeare’s Celebrations to develop a special timetable of events for another landmark year in 2016.    Four hundred years since Shakespeare’s passing there are plans for even more exciting things to see and do at next year’s festival!

Visit www.shakespearescelebrations.com for full details of what’s happening when and where at Shakespeare’s Birthday Celebrations 2015.